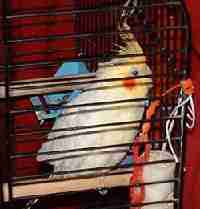 Many folks that are not pet lovers never understand the loss of a treasured pet while others only think of ‘pets’ in terms of dogs and cats. Anyone that has ever owned a bird will testify that our aviary friends soon become much more than just your everyday run of the mill pet. We had such a bird for many years and had to have him euthanized due to his deteriorating health.

Petey was our cockatiel/friend/family member for well over 23 years. To say that having him euthanized was a difficult decision to make would be an understatement. This picture was the last taken of him just hours before that much dreaded trip to the vet. It was a trip that we would never wish upon anyone that owns one of these little guys, it’s a pain that isn’t easily healed.

Petey was only a bird to some folks that visited us but I jokingly referred to him as my ‘attack bird’. People he knew could come into the house and he wouldn’t make a sound, let the person be unknown to him and watch out! The cockatiel may be small but Petey didn’t seem to know that, at times he acted as if he was an Eagle. Many a time I was alerted by our little buddy that a stranger or strange vehicle was in our driveway, I don’t know how he knew but he did. I discovered this many years ago and thought it a coincidence but we tested him and sure enough, he had some sort of recognition of what and who belonged in ‘his’ driveway.

Cockatiels have good life span and we have been told that we must have done something right to enjoy 23 long years with our little Petey. It may have been 23 years in time but we weren’t ready to give him up. But we also realized it wasn’t right for him to suffer with the infection that has settled into his preening gland. It was hard to give him up and it is hard to walk by his now empty cage. We have all developed so many routines concerning Petey that we catch ourselves talking to the cage as we come in to the room. Or we go to cover him at night, coming to a halt when we find our hand on the cage and he is no longer in there.

Plus we’ve added Peaches, our Lovebird.

Get your FREE copy today!